Retreat of a tidewater glacier

For decades now glaciers all around the world have been retreating, a phenomenon directly linked with the temperature rise due to climate change.

The retreat of several tidewater glaciers, which are glaciers ending in the sea, is very spectacular. Tidewater glaciers exist e.g. in Alaska, in Patagonia and along the coasts of Greenland. These glaciers end directly at sea level, therefore their environment is relatively warm during summer. As a consequence, the end zones of these glaciers are among the fastest flowing ice streams on Earth. Their lower end floats on the water of the sea and follows the tidal movement. This movement enhances the formation of cracks and of the calving of icebergs that float off into the sea. 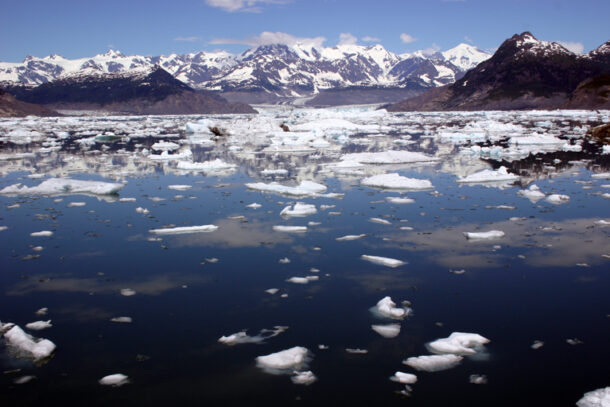 The Columbia Glacier is located in Alaska. Descending from more than 3000 meters above sea level, it flows into the Prince William Sound at the coast of the Pacific Ocean. For a long time the nose (or terminus) of the glacier remained stable near the mouth of Columbia Bay. However, since the 1980ies it has retreated by more than 20 kilometers.

This glacier shows that the combination of different effects can lead to a highly dynamical evolution. At the beginning, the nose of the glacier was supported by the gravel of the end moraine. After the initial phase of the retreat it floated on water, making the tidal forces more effective and thus increasing the speed of the retreat, even more so as this allowed warmer water from the ocean to flow under the ice.