The Salar de Atacama in Chile covers an area of about 3050 km² and is the largest salt flat or saltpan of this country. It is a plain located at an elevation of 2300 m above sea level in the mountain range of the Andes. The surface of the salar consists of salts mixed with sand, which gives it a brownish colour in the satellite image.

The surrounding mountain ranges block clouds from reaching the region, which receives only extremely small amounts of precipitation. With only 2 mm rain per year it is among the driest regions in the world. The water from the scarce precipitation in the surrounding mountains is enriched with minerals and salts and flows to the lowest point, the saltpan. Here the water evaporates, leading to a concentration of the minerals and salts. 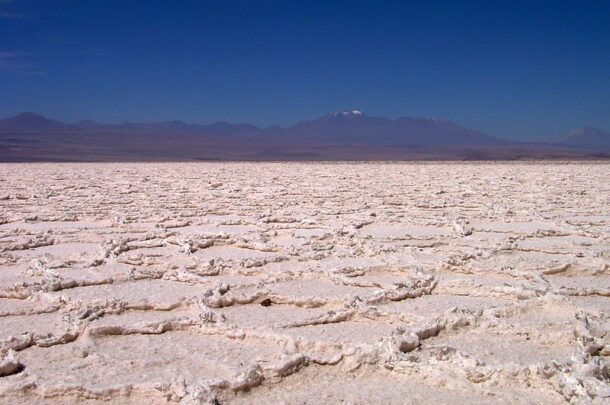 This process has formed a deep body of brine that reaches down to 1.7 km below the surface. It consists mostly sodium chloride (about 90%) and is rich in lithium, potassium, magnesium and boron. The brine is pumped to the surface of the salar, where the water evaporates at the extremely high evaporation rate of 3500 mm per year, leading to an enrichment of the salts. This special situation has made the Salar de Atacama one of the most important lithium production sites, with about 36 percent of the global lithium production and about 27 percent of the worldwide known lithium reserves. The chemical element lithium has become an increasingly important resource, because it is used in the production of efficient battery cells needed e.g. in electric cars and smartphones.

The false colour infrared satellite images in the map above show vegetation in red. In this barren environment only small patches of vegetation along the eastern rim of the salt flat can be seen. The region is home to the Andean flamingos that suffer from the deterioration of their habitat by the mining activities.